I spent three weeks in September visiting the main locations that are featured in my first Sargent-Paget mystery, The Spoils of Avalon: Lanercost Priory and Brampton Town in the north of England (Cumbria), and the village of Glastonbury with the ruins of the Abbey in Somerset in the south. I had anticipated having a good time, and learning some interesting facts, but I soon found myself overwhelmed by the deep sensory and spiritual experience of being alive in the places I had just spent a year writing about. I carried around with me an advance copy of my book and wrote in it constantly, making changes and adding scenes as the spirit moved me—and it often did!

In my book, I alternate between two time periods: 1877, with John Singer Sargent and Violet Paget, best friends from the age of 10, embarking on an adventure that takes them north to Cumbria, and which starts with murder and ends with magic; and 1539, in Glastonbury, with a young novice monk named Arthur Joseph, who witnesses the tragedy of the Dissolution of the Monasteries under King Henry VIII and Thomas Cromwell. 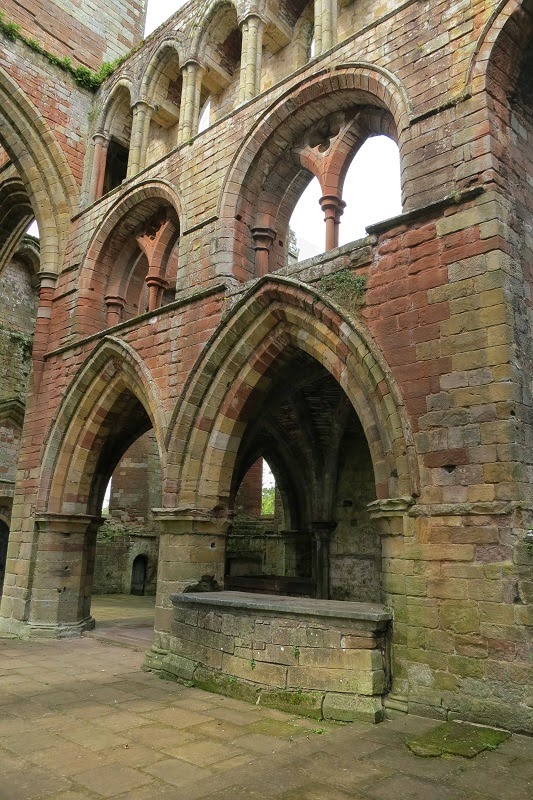 Built in 1169 by the Dacre family, the Priory was the home of Augustinian canons who, unlike monks in a monastery, did not live a cloistered life, but rather went out to the people in the surrounding areas, preaching and teaching and serving the poor. 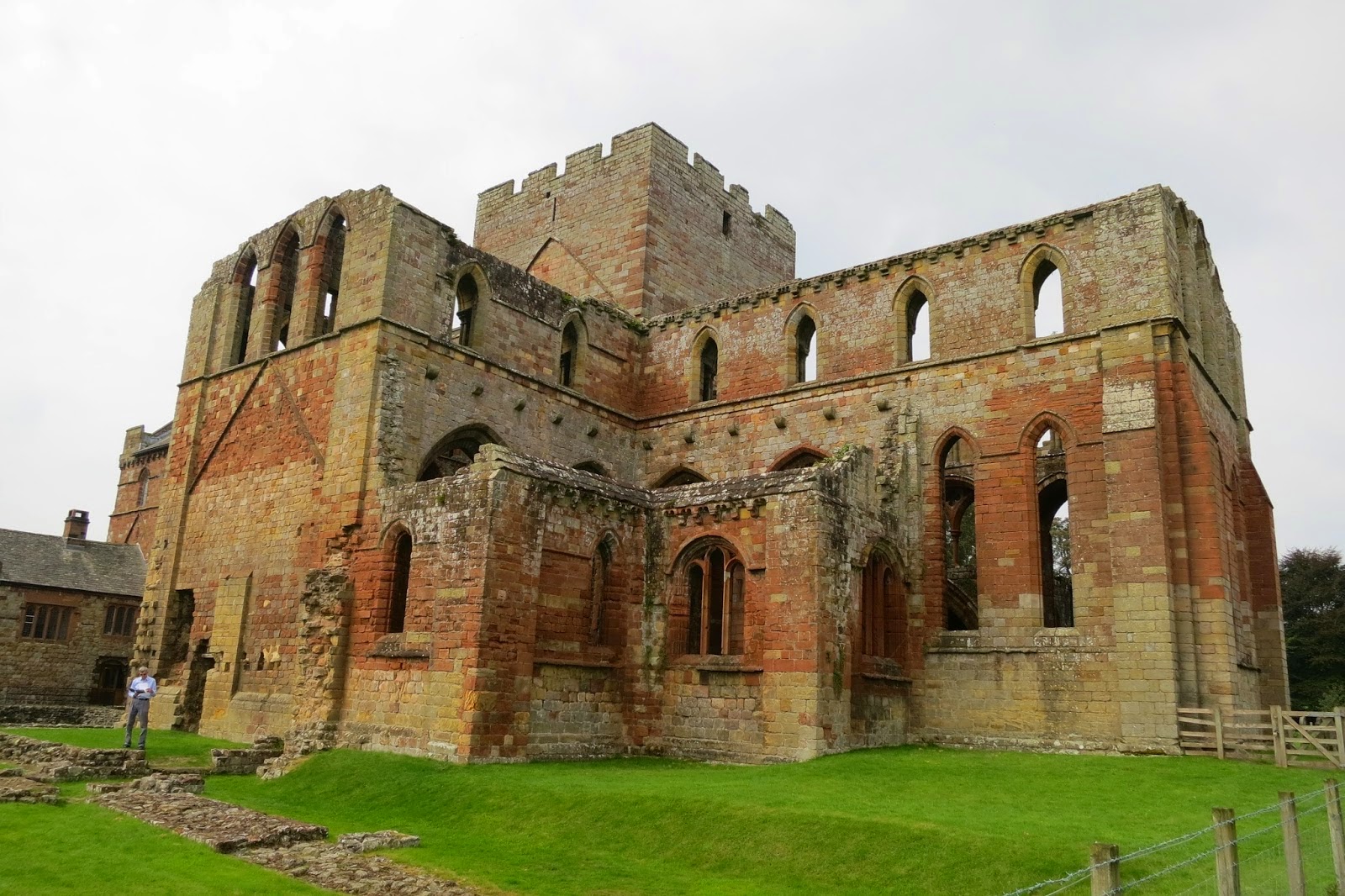 When I first arrived at the site, which is now managed by the English Heritage Society, I was struck with the beauty and color of the old stonework. The ruins are unbelievably magnificent, and many of the stones used to built are said to be taken from the relatively nearby (1/4 mile up the hill) remains of Hadrian’s Wall, which was plundered of its dressed stone for many a century after the Roman soldiers left in the 300’s. 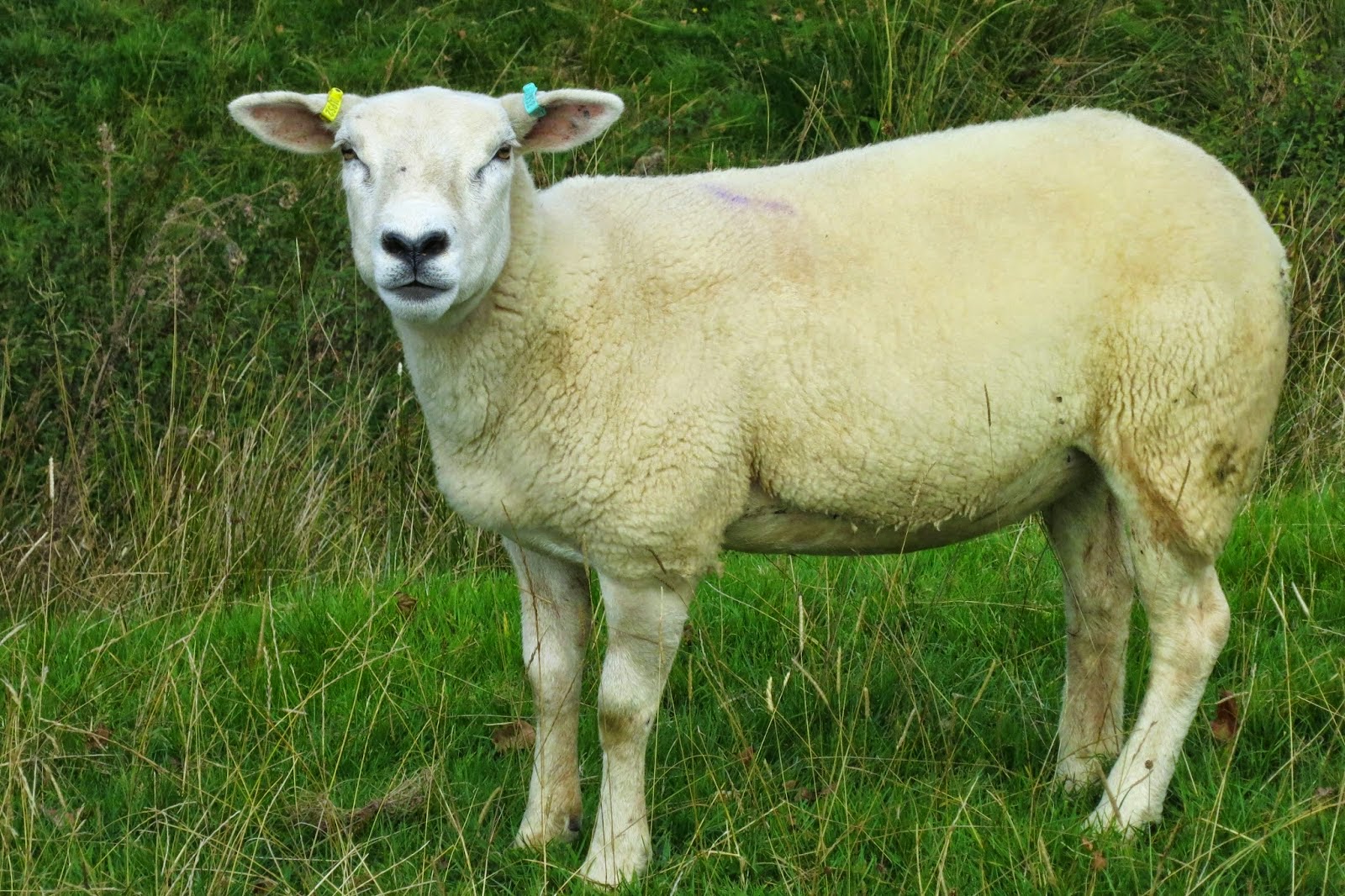 The Priory is set in the midst of rolling hills alive with numerous flocks of sheep and small herds of cattle that move from meadow to meadow throughout the day. Surrounded with the chirping of birds, roosters crowing, and jackdaws swooping and calling, the Priory begins to feel rather homey and domestic. After a very little while, however, I began to feel it was just exactly the right size, and felt very good just walking around the building and grounds. The baa-ing of the sheep, lowing of cattle, and the roosters and chickens clucking and carrying on made it feel timeless, as if these were the sounds that the people in the Middle Ages heard all day long, too. There were no airplanes overhead, and the car noises were relatively infrequent, especially after dusk. 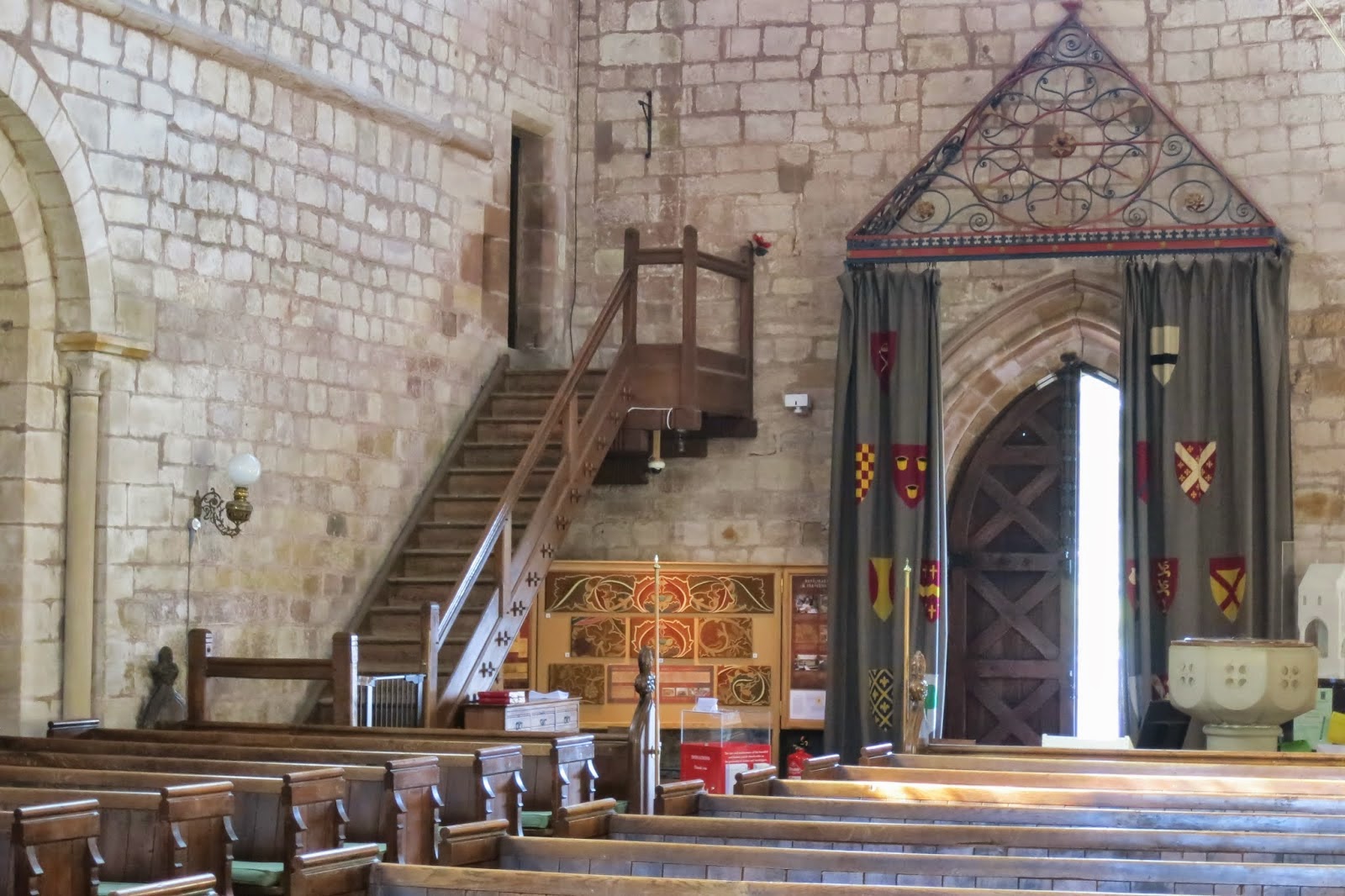 Although the ruins are extensive, there is a considerable part of the original church that is still in use as an Anglican church today, St. Mary Magdalene--it had been repaired and maintained since the late 1500's, and still is home to parishioners and worshippers who are baptized, married and buried within its ancient walls. 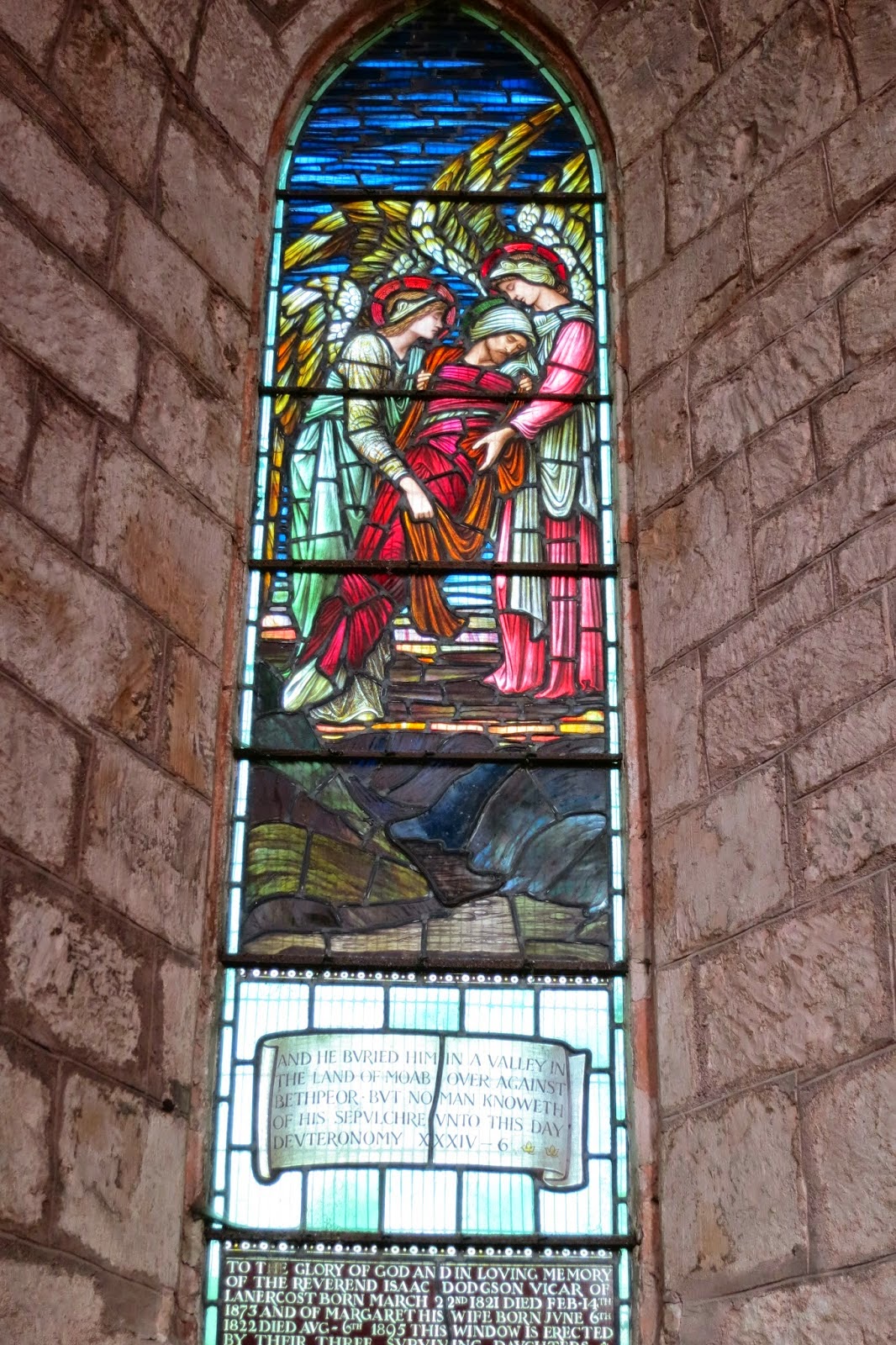 Both sets of my characters, from both timelines, are visitors to Lanercost Priory after it has been laid waste, and I was deeply moved by standing in the forlorn and sacred space of a once-magnificent and holy place, and that experience allowed me to re-write some passages in my novel more authentically. 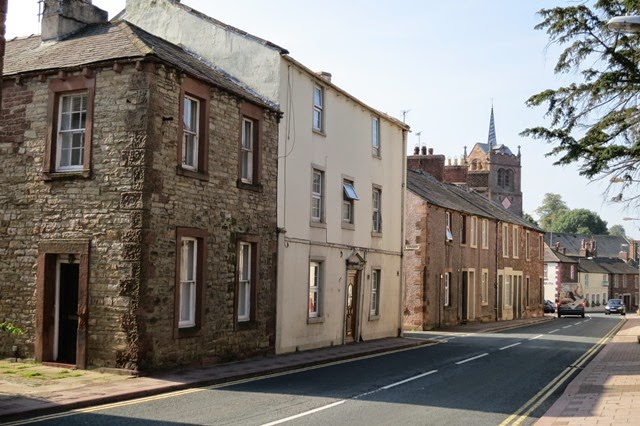 The small town of Brampton is where John and Violet stay during their week-long visit to the North, and I was delighted to visit the village and see that it wasn’t very much different from how I had pictured it. It’s barely two miles from the ruins of Lanercost Priory, and as we drove back and forth on the (very) narrow road between the two places, I often pictured what it would be like to ride along in an open carriage, hearing the horse’s steps and the rattle of the carriage. I discovered that one such trip I had written about needed revising, as a castle that I had described as being “espied from the road” was in fact deep beyond some hills and woods, and could never be seen from that particular road! 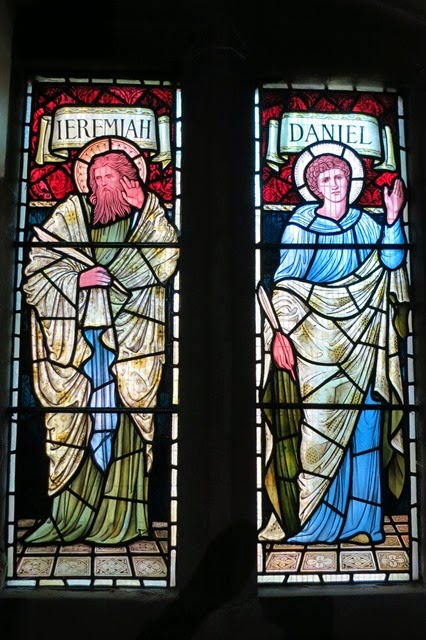 Brampton itself is a nice little town with winding streets, and the tallest building is the church, St. Martin’s. It was designed and built by Philip Webb, an architect who worked for the Arts & Crafts firm of Morris & Co—and a very special element of the church is the presence of stunning stained glass windows designed by Edward Burne-Jones. 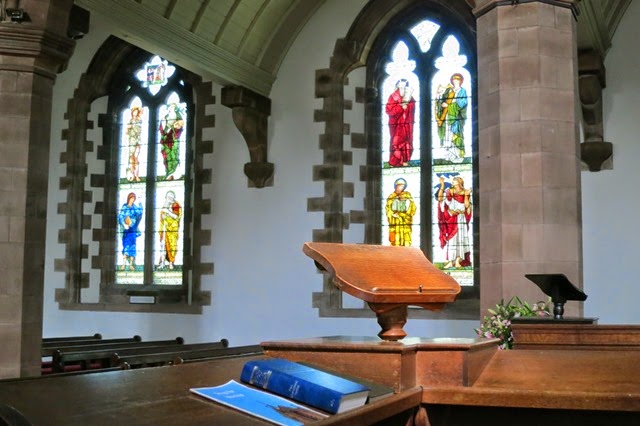 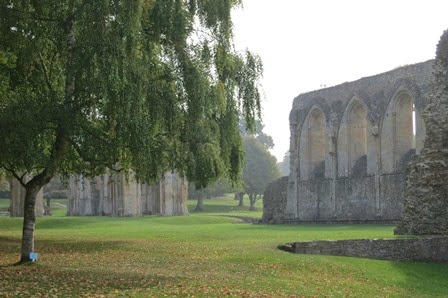 After a week at Lanercost and Brampton, we took a train down to Bristol, rented a car and drove the thirty miles or so to Glastonbury through a flat, watery country—Somerset, often called The Summer Land, and the ancient places where the legends of King Arthur, the Round Table, and the Holy Grail sprung forth from the Isle of Avalon, or the Isle of Glass. 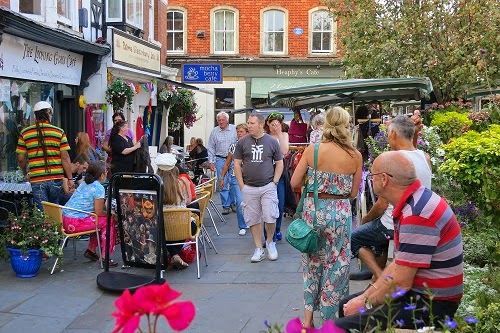 Glastonbury has become rather commercialized, especially with the popularity of the summer outdoor concert, but also because of the thousands of people who flock there to find spiritual succor at its various holy and sacred sites: the Chapel of St. Michael on the Tor (meaning ‘hill’), the Chalice Well, the Thorn Tree of St. Joseph, and the ruins of the great Abbey itself.

September, which threatens rain every day, turned out to be a good time of year to visit, and none of the sites we visited were in the least bit overrun with people. 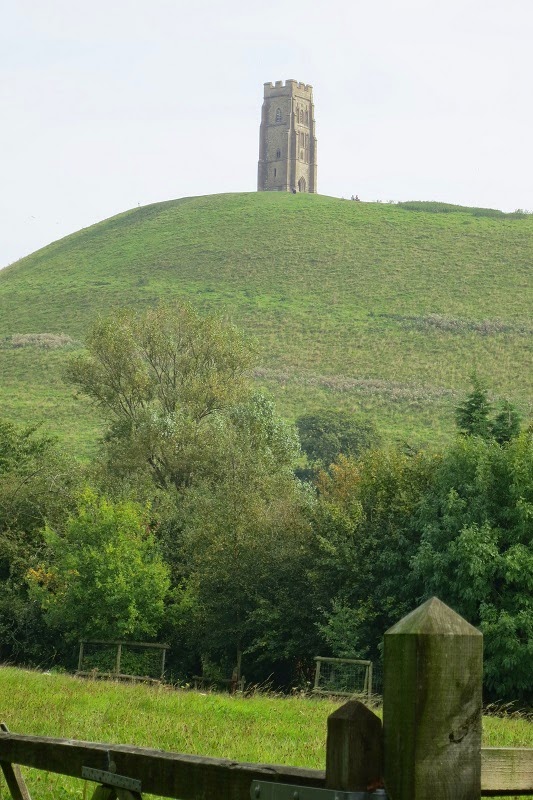 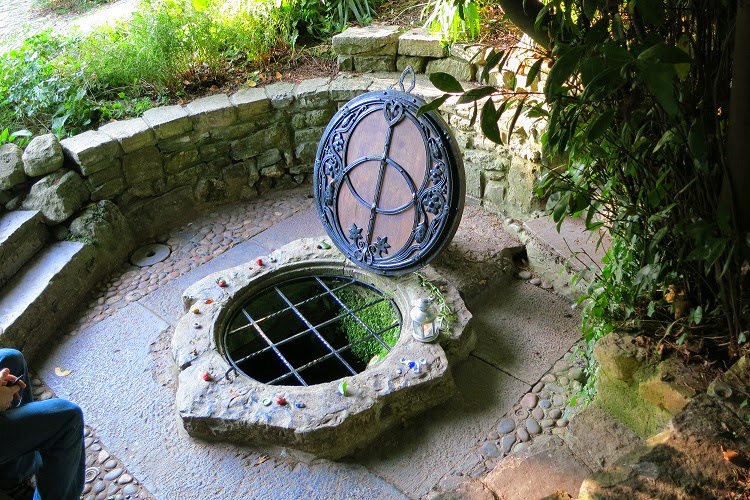 I was exceedingly lucky to be able to sign up for a day-long workshop on Gregorian Chant, which was held in the only building that was not destroyed during the Dissolution, the Abbot’s Kitchen. The professor of music who led the class taught us how to read the music, and we sang the Office of St. Dunstan (appointed as Abbot of Glastonbury in 943 by King Edmund) all during the day, learning the pieces bit by bit. I felt as if I had been transported to the 16th century, or earlier, and was experiencing a little of what the monks and other folk who lived at the Abbey did and felt in those times. This event also helped me fine-tune some scenes in my book, based on the sense of place and time I had experienced. 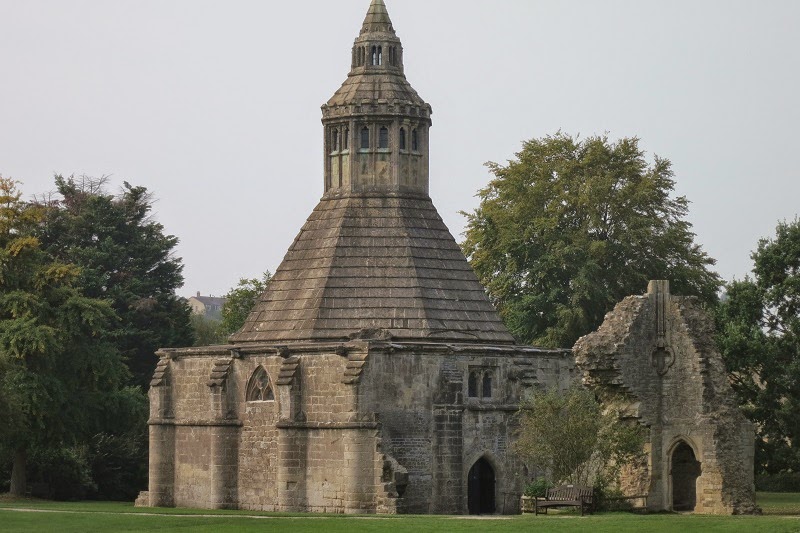 I have to say, though, that I don’t think I would have wanted to visit any of these site before I wrote my novel. I think it might have gotten in the way of actually writing the story, as if the scope and grandeur and beauty of these places would have overwhelmed and intimidated me. There’s no real way of knowing if that’s true or not, but I can say that I am very glad to have visited these places with my book in hand, and that making changes to the descriptions or scenes afterwards worked very well for me.

You can see a lot more photos and read about my research trip at my blog for this mystery series: www.sargent-pagetmysteries.blogspot.com. Thanks for reading, and I would be delighted to answer questions or read your comments!

The death of a humble clergyman in 1877 leads amateur sleuths Violet Paget and John Singer Sargent into a medieval world of saints and kings—including the legendary Arthur—as they follow a trail of relics and antiquities lost since the destruction of Glastonbury Abbey in 1539. Written in alternating chapters between the two time periods, The Spoils of Avalon creates a sparkling, magical mystery that bridges the gap between two worlds that could hardly be more different—the industrialized, Darwinian, materialistic Victorian Age and the agricultural, faith-infused life of a medieval abbey on the brink of violent change at the hands of Henry VIII and Thomas Cromwell.

First in a new series of historical mysteries, The Spoils of Avalon introduces two unlikely detectives and life-long friends—beginning as young people on the verge of making their names famous for the next several decades throughout Europe and America: the brilliant and brittle Violet Paget, known as the writer Vernon Lee, and the talented, genial portrait painter John Singer Sargent.

Friends from the age of ten, Paget and Sargent frequently met in the popular European watering places and capitals, frequenting the same salons and drawing rooms in London, Rome, Paris, Florence, Venice, Vienna and Madrid. Both were possessed of keen minds and bohemian tendencies, unorthodox educations and outsized egos (especially Paget). Their instant, natural bonding led them to address each other as “Twin”, and they corresponded frequently when they were apart.

Henry James once described Violet Paget as having “the most formidable mind” of their times, and he was an active fan and patron of John Sargent, introducing him to London society and his own inner circles of literary and artistic genius.

Praise for The Spoils of Avalon
“An artist, a writer, a murder, a mysterious tome, a dissolving time, a crime, Arthurian legends, ancient saints books and bones. Burns’ prose drives and is sublime, with characters and settings that live on in your mind. This is an original historical mystery connecting the Age of Industry with the Age of Miracles.” – Stephanie Renée dos Santos, forthcoming novel: Cut From The Earth 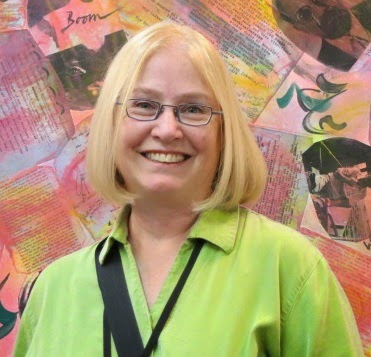 About the Author
Mary F. Burns is the author of PORTRAITS OF AN ARTIST (Sand Hill Review Press, February 2013), a member of and book reviewer for the Historical Novel Society and a former member of the HNS Conference board of directors. A novella-length book, ISAAC AND ISHMAEL, is also being published by Sand Hill Review Press in 2014. Ms. Burns’ debut historical novel J-THE WOMAN WHO WROTE THE BIBLE was published in July 2010 by O-Books (John Hunt Publishers, UK). She has also written two cozy-village mysteries in a series titled The West Portal Mysteries (The Lucky Dog Lottery and The Tarot Card Murders).

Ms. Burns was born in Chicago, Illinois and attended Northern Illinois University in DeKalb, where she earned both Bachelors and Masters degrees in English, along with a high school teaching certificate. She relocated to San Francisco in 1976 where she now lives with her husband Stuart in the West Portal neighborhood. Ms. Burns has a law degree from Golden Gate University, has been president of her neighborhood association and is active in citywide issues. During most of her working career she was employed as a director of employee communications, public relations and issues management at various San Francisco Bay Area corporations, was an editor and manager of the Books on Tape department for Ignatius Press, and has managed her own communications/PR consulting business, producing written communications, websites and video productions for numerous corporate and non-profit clients.

Ms. Burns may be contacted by email at maryfburns@att.net. For more information please visit Mary Burns’s website. You can also connect with Mary on Facebook, Twitter, and Goodreads, or read her blog posts at:

Follow the instructions on the Rafflecopter form below to enter for a chance to win one copy of The Spoils of Avalon (eBook or Print, Winner's choice), open to US, UK, Canada, and Australia residents.