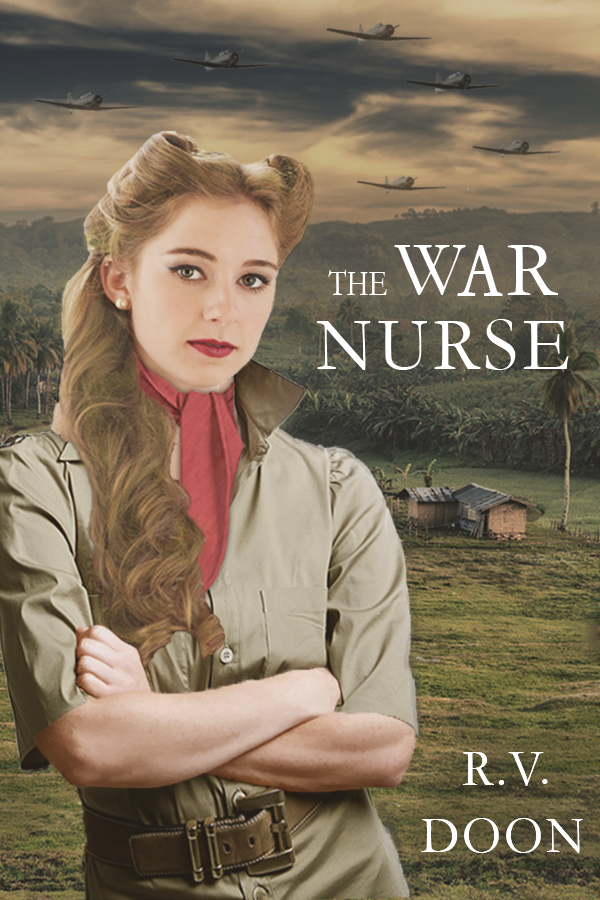 War brings out the best and worst in people. The greatest leaps in health care, surgical techniques, and new medicines have followed wars. Sadly, we still don’t have the cure for soldier’s heart now called PTSD. I can’t help wondering why.

Why set a woman’s story in a soul-sucking war zone?

Because war stuns people of conscience and they can’t be neutral. The devastation and loss of life moves many to alleviate suffering any way they can. Their humanity shines. The borderline humans let go of all restraints and unleash their obsessions. The latter is where the war horror stories come from. People without a conscience are drawn to the ones that shine.

The War Nurse is a woman’s journey into the ‘heart of darkness.’ Katarina Stahl is an American Red Cross nurse in Manila, a lush, tropical paradise when the war explodes. With bombs falling, she makes a bad decision. She doesn’t realize her decision will slam her New York family into their own dark voyage. She didn’t know the German doctor she saved had made previous inquiries about her family from the German Consulate in Manila. She doesn’t know the FBI dragnet has already scooped them up and detained them behind barbed wire.

In the war zone, the doctor pretends he’s at the camp to return her survival favor. He begs her to save herself and her unborn child by nursing his wife in their home. This is when Katarina makes a life-altering pact with a he-devil. Read the excerpt:

“You were a war nurse on Bataan, and for you, there is only imprisonment. Nursing is an honorable job. After Minka’s delivery, I’ll turn you over if you wish to starve and sing patriotic songs behind bars.”

“Did you swear an oath to your husband or to the military?”

Jack told her to live at all costs.

A Japanese soldier came to the door and beckoned von Wettin.

He helped her stand. “Choose to go with me or stay behind as the only female.”

His words chilled. She wouldn’t survive one night alone. “I have to get my things.”

Panicking, she dashed to the hut for wet laundry, and then back to the sleep room. Wet clothes went first into a hemp bag, followed by dry. Last, she removed Jack’s picture from under the pillow and stared at it. Jack would tell her to do whatever it took to survive the war, short of murder. She tucked him into her pocket and put on the anting-anting necklace. She stared at the austere sleep space. What had Hub said? Luck favors risk takers.

Going to von Wettin’s home could mean the difference between survival or losing Jack’s baby. But she knew he’d extract a heavy price for accepting his offer. Even so, it was time to put the needs of her baby first. How many times had she cried herself to sleep worrying? In nightmares, she’d eaten her baby.

“I’ll be Minka’s nurse,” she said, joining von Wettin. Her morning mush threatened to come back up, and her skin turned frosty. He’d cornered her, preyed on her fears, and pretended she had choices. He lied as easily as breathing, but so could she.

This historical thriller begins on the eve of WWII in the Philippines. Katarina Stahl an American Red Cross nurse, is the happiest she’s ever been in her life. She’s making love and playing music with Jack Gallagher in an idyllic paradise. Their medical mission is over, the boat tickets to home are purchased, and all that remains is to fly a sick child to the hospital at Clark Air Field.

She never expected to witness bombs falling out of planes. In those terrifying first minutes, she frees a German doctor accused of spying and saves his life. She turns to nursing the injured, unaware she’s unleashed an obsession more dangerous to her and those she loves, than the war she’s trapped in.
Doctor von Wettin, the man she freed, finds Katarina pregnant and starving in a POW camp after the surrender. He begs her to nurse his bed-ridden wife. She knows other Americans will despise her, but wants her baby to live after surviving Bataan. Their uneasy alliance is destroyed when she discovers he exploited Red Cross diplomatic channels and contacts at the German embassy to wire money to her parents. His benevolent mask slips when he informs her that her brothers and parents are interned on Ellis Island.

When the Stahl family is swept up in the FBI’s dragnet, Josep Stahl believes it’s all a misunderstanding. He’s interrogated like a criminal at the city jail, a military camp, Ellis Island, and then the civilian internment camps in Texas. His anger and pride blind him. One by one in this painful family drama, his wife and sons join him behind barbed wire in. There they face ostracism, segregation, and, most frightening, repatriation.

Katarina begins an even more terrifying journey into depraved darkness as Manila descends into occupation and chaos. The doctor threatens everyone she loves: infant son, POW husband, and Filipino friends. She’ll do anything to protect them; she lies, steals, and smuggles. As the war turns against the Japanese, they withhold the doctor’s wife’s life-saving medications until he finds a hidden radio inside the civilian internment camp. If Katarina refuses to help him, her son pays the price.

Survival has corrupted Katarina; but she’s not about to become his camp rat. After years of hell, she’s earned her nickname, war nurse. Doctor von Wettin is about to find out what that means.

About the Author
R.V. Doon is a bookie! Seriously, she’s an avid reader who also loves to write. She writes across genres, but confesses she’s partial to historical fiction and medical thrillers. She’s addicted to black coffee, milk chocolate, and raspberries. When she’s not reading or writing, she’s learning to sail. Doon reports after a career of implementing doctor’s orders, she’s having trouble being a deck hand and following the captain’s orders. Doon lives in Mobile, Alabama, a haunted and historical city, with her husband and two dogs.
For more information please visit R.V. Doon’s website. You can also find her on Facebook, Twitter,Google+, Goodreads, and Amazon.
Subscribe to R.V. Doon’s Newsletter for news & updates.

Giveaway
To enter to win a $15 Amazon Gift Card or one of three copies of The War Nurse, please complete the Rafflecopter giveaway form below.

Rules
– Giveaway ends at 11:59pm on December 5th. You must be 18 or older to enter.
– Giveaway is open to residents of the US only.
– Only one entry per household.
– All giveaway entrants agree to be honest and not cheat the systems; any suspect of fraud is decided upon by blog/site owner and the sponsor, and entrants may be disqualified at our discretion
– Winner have 48 hours to claim prize or new winner is chosen.