PORTRAIT OF A WOMAN COMPOSER
Guest blog by Alison McMahan 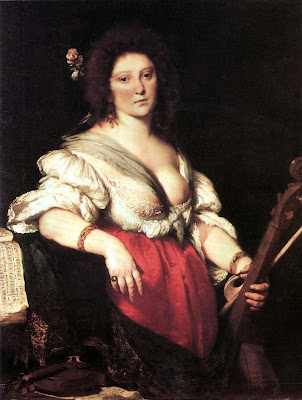 The paintings of Bernardo Strozzi greatly inspired me when it came to creating the characters in my book, The Saffron Crocus. Strozzi was a painter who fled Genoa because he no longer wanted to live as a Capuchin monk. He ended up in Venice where he produced many portraits, including one of Claudio Monteverdi, until his death in 1644.

In addition to his portraits he painted many allegorical paintings, images of saints, and scenes of daily life. He painted pictures of St. Cecilia several times, images such as this one: 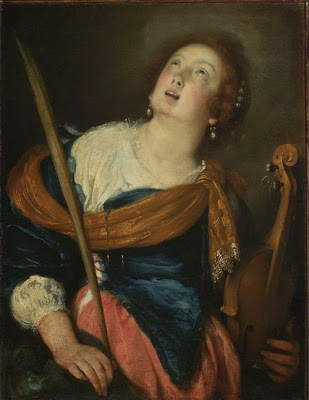 St. Cecilia's had several traditional features: the transported expression, the musical instrument, the modest dress among them.

Then Strozzi painted the image of "Woman with a Viola da Gamba."

The painting has some of the elements that match it to a St. Cecilia: the musical instrument, the pose of a young woman visible to the waist. But there all resemblance to a picture of saint ends. This young woman is not transported, she looks at the viewer directly, with a worldly and somewhat bored gaze. She is not modest at all; in fact, her cleavage is so low that one breast is completely bared.

The bared breast and the fact that there is a violin in the image, along with her viola da gamba, and the music is for a duet suggests that she is waiting for a partner to come and "make music" with her. In other words, that she is a courtesan.

I referred to this image in The Saffron Crocus, and the heroine's discovery of it marks a key turning point in her understanding of the world. At the time I wrote the book I accepted the traditional interpretation of the painting, that the pose and the décolletage indicated that the sitter was a courtesan. Since then I've learned a few things which are much more interesting than the traditional interpretation.

For example, some have argued that the portrait is an allegorical image, of Flora, similar to Titian's: 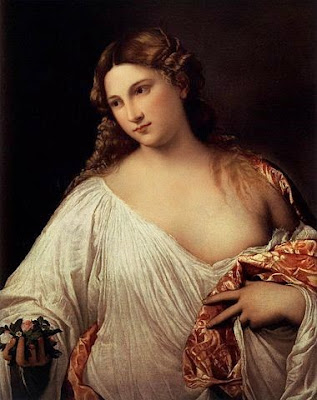 Courtesans in Venice did bare their breasts, as a way of marketing their goods, and tinted their nipples red. Or they stood on their roofs, bleaching their hair to achieve a blond color, wearing nothing but a shimmery shift that also revealed their breasts to any passerby.

But it's hard to say that the bare breast in this image indicates the woman is a courtesan. Strozzi used bare-breasted women in many images, usually allegorical ones, such as his allegory of the arts: 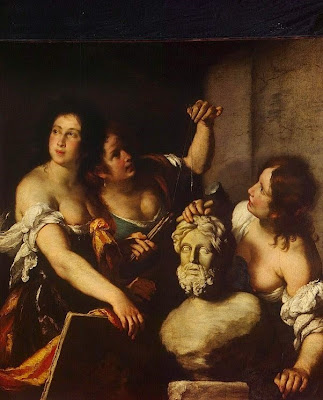 Scholars David Rosand and Ellen Rosand have argued that the picture of the viola da gamba player picture is actually a portrait of Barbara Strozzi (no relation to Bernardo). They have various reasons for this attribution, mainly, that events we know about her life match the depiction in the image. Specifically, they refer to the fact that Barbara Strozzi was the "mistress of ceremonies" of the Accademia degli Unisoni, a salon for philosophical and artistic discussion organized by her adoptive (her perhaps natural) father, Giulio Strozzi. The Rosands mention a particular event that might have led to the pose and costume in the portrait in which Barbara sang and handed out flowers as prizes to the one who wrote the most impressive argument on whether tears or song was the most potent weapon in love.

As I read about this attribution I became eager to know more about Barbara Strozzi. Not whether she was a courtesan (there is evidence that she partnered with one man most of her life, as she had three children with him) but as a musician.

She wasn't the first musician to have her music published. That honor goes to Maddalena Cassulana whose first work, a collection of four madrigals, was published in Florence in 1566. But Strozzi published voluminously, more than any other composer of her time. She is credited with creating the cantata. And she did all this without the patronage of a noble or the church. She spent her life trying to find such patronage and did not succeed.

She did have her father's support, though. At least one scholar claims Giulio Strozzi created the Accademia degli Unisoni to encourage her work. Though her association with the Unisoni is also what led to outsiders claiming she had sold her virtue.

It seems sad to me that what most people might know about Strozzi is these allegations that she was a courtesan. That bared breast is all we see when we look at that image. I encourage my readers to listen to her music instead. Here's a lovely performance of her aria "Che si può fare": 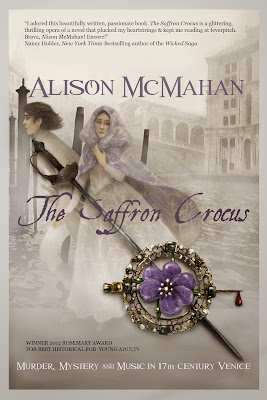 Winner of the 2014 Rosemary Award for Best Historical for Young Adults.
Venice, 1643. Isabella, fifteen, longs to sing in Monteverdi’s Choir, but only boys (and castrati) can do that. Her singing teacher, Margherita, introduces her to a new wonder: opera! Then Isabella finds Margherita murdered. Now people keep trying to kill Margherita’s handsome rogue of a son, Rafaele.

Was Margherita killed so someone could steal her saffron business? Or was it a disgruntled lover, as Margherita—unbeknownst to Isabella—was one of Venice’s wealthiest courtesans?

Or will Isabella and Rafaele find the answer deep in Margherita’s past, buried in the Jewish Ghetto?

Isabella has to solve the mystery of the Saffron Crocus before Rafaele hangs for a murder he didn’t commit, though she fears the truth will drive her and the man she loves irrevocably apart.

Who knew a singing career would be this much trouble?

“Rafaele!” She flew into the garret. “Piero, it was so wonderful, wait until I tell you!”

The stool next to the bed was knocked over. The tray with the genepy bottle was on the floor, one of the cups broken. The fat candle that had been burning next to Rafaele’s bed had been flung to the other side of the room.. Canvases were strewn all over the floor, some of them slashed, and many of Master Strozzi’s jars of paint elements were broken.

Did Piero and Rafaele have a fight? She quickly suppressed the thought. Who would get into a fight with a man who was already injured?

Something else must have happened.

She walked across the garret. “Piero? Rafaele, are you here?”

Rafaele was not in the bed. The sheets and blankets she had piled on top of him were strewn everywher. Blood-stained sheets spilled over the edge of the pallet. There was a pile of clothes on the floor.

She walked around to get a closer look.

Not clothes. It was Piero. Face down, one arm stretched out before him, as if in supplication.

A puddle of blood under him.

Praise for The Saffron Crocus
“I adored this beautifully written, passionate book. The Saffron Crocus is a glittering, thrilling opera of a novel that plucked my heartstrings and kept me reading at fever pitch. Brava, Alison McMahan! Encore!” -Nancy Holder, New York Times Bestselling Author of the Wicked Saga 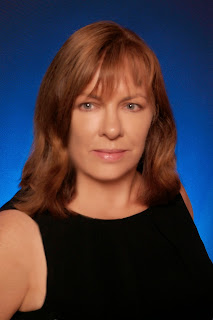 About the Author
Alison McMahan chased footage for her documentaries through jungles in Honduras and Cambodia, favelas in Brazil and racetracks in the U.S. She brings the same sense of adventure to her award-winning books of historical mystery and romantic adventure for teens and adults. Her latest publication is The Saffron Crocus, a historical mystery for young. Murder, Mystery & Music in 17th Century Venice.

She loves hearing from readers!

Giveaway
Enter to win a paperback copy of The Saffron Crocus, open to US residents only.


Rules
– Must be 18 or older to enter.
– Giveaway is open to US residents only..
– Only one entry per household.
– All giveaway entrants agree to be honest and not cheat the systems; any suspect of fraud is decided upon by blog/site owner and the sponsor, and entrants may be disqualified at our discretion.

The Saffron Crocus Giveaway
Posted by Michelle Stockard Miller at Wednesday, May 13, 2015