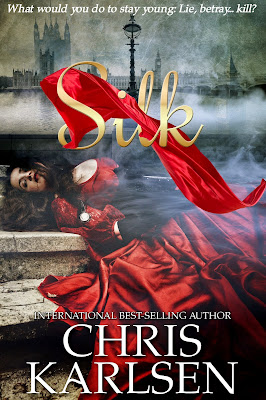 A Muse With A Historical Bent

My father taught history. The politics, culture, and people of different periods was a common topic in our house. When I decided to do what I'd secretly wanted to try for many years, write, my long quiet muse went in search of people and events to build a world around.

Not all periods and places interest me while others have a strong draw for me. I write a Knights in Time series where a part of the story is set in medieval England and occasionally France. The battle of Poitiers, a great English victory fought in 1356, is the common denominator for those characters. My latest release, Silk, a suspense/thriller, is set in Victorian England, London in particular.

I chose Victorian London for a couple of reasons. So much changed over that time period, developments in industry and the expansion of the British Empire are two examples. The period conjures up both romantic images perfect for Christmas cards and menacing images of dark allies and people living hard lives. You could turn a corner and run into a polished carriage pulled by a handsome team of horses, or, you could turn a corner and run into Jack the Ripper. I thought it the most atmospheric of cities for my killer and detective to challenge each other.

Another reason I chose this time period (1888) was for my protagonist's personal history and quality of character. Several years ago, I had the occasion to visit the South Wales Borderers regimental museum. I was interested in the Zulu wars of 1879 and in particular two battles fought by that regiment: Isandhlwana and Rorke's Drift. Eleven Victoria Crosses, the equivalent of our Medal of Honor, were awarded to the men who fought at Rorke's Drift. After speaking at great length with the volunteers at the museum who gave me a private tour, I knew if I ever wrote a book, one day I'd use a veteran of this battle as the protagonist.

In Silk, Detective Inspector Rudyard Bloodstone was ill with a serious fever when the hospital station at Rorke's Drift was attacked by thousands of Zulu warriors. He managed to rise and fight after saving the lives of several men unable to walk on their own. As a result, he was awarded a Victoria Cross for "Extreme valour in the face of the enemy." Rudyard (Ruddy) keeps the medal and the queen's declaration in his sock drawer. He doesn't consider himself a hero. To him, he was just a soldier doing what was necessary in battle.

I treat settings like characters. They are living, breathing things. They evoke emotions the way the men and women in the story do. They can be beautiful and make you want to stay in that moment and place. Or, they can frighten as cold fog wraps around the human characters and the dark holds danger. In the Knights in Time books, I loved recreating medieval England without the iconic trappings so familiar with today: Big Ben, double-decker buses, black cabs, and tourists gathered around Buckingham Palace. In Silk, I loved showing London through the eyes of the different classes. The multi—facets of the city. One oddity I discovered in my research was an "entertainment" enjoyed by the middle class. There's scene in Silk that takes place in an asylum. I learned for a time asylums made a profit by letting so called normal folk view the lunatics (a common term used at the time) for a penny a tour.

I try to recreate the place and time by walking through it mentally. Every sidewalk my protagonist goes down, every room he or she enters I note the details along with them. Since I can't time travel in reality, I can travel through time on the page.

The city is in a panic as Jack the Ripper continues his murderous spree. While the Whitechapel police struggle to find him, Detective Inspector Rudyard Bloodstone and his partner are working feverishly to find their own serial killer. The British Museum's beautiful gardens have become a killing ground for young women strangled as they stroll through.

Their investigation has them brushing up against Viscount Everhard, a powerful member of the House of Lords, and a friend to Queen Victoria. When the circumstantial evidence points to him as a suspect, Rudyard must deal with the political blowback, and knows if they are going to go after the viscount, they'd better be right and have proof.

As the body count grows and the public clamor for the detectives to do more, inter-department rivalries complicate the already difficult case. 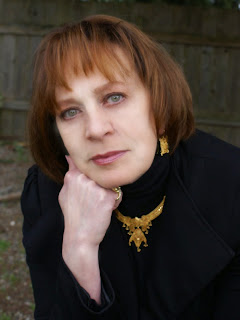 About the author
Chris is a Chicago native. Her family moved to Los Angeles when she was in her late teens where she later studied at UCLA. She graduated with a Business Degree. Her father was a history professor and her mother a voracious reader. She grew up with a love of history and books.

Her parents were also passionate about traveling and passed their passion onto Chris. Once bitten with the travel bug, Chris spent most of her adult life visiting the places she'd read about and that fascinated her. She's had the good fortune to travel Europe extensively, the Near East, and North Africa, in addition to most of the United States.

After college, Chris spent the next twenty-five years in law enforcement with two agencies. Harboring a strong desire to write since her teens, upon retiring from police work, Chris decided to pursue her writing career. She currently writes three different series. Her historical romance series is called, Knights in Time. Her romantic thriller series is Dangerous Waters, and he latest book, Silk, is book one in her mystery/suspense series, The Bloodstone series.

She currently lives in the Pacific Northwest with her husband and five wild and crazy rescue dogs.

Website / Facebook / Pinterest / Trailer
Giveaway
Enter to win a Silk prize pack (via the Gleam form below) as follows:
One winner will be awarded:
a copy (print or kindle) of Silk
a swag bag
a $10 Amazon gift card
a Kindle copy of Knights in Time (the author's boxed set of historical romances)

* Giveaway is open internationally.
* Giveaway ends at 11:59pm on May 8th.
* You must be 18 or older to enter.
* Only one entry per household.
* All giveaway entrants agree to be honest and not cheat the system; suspicions of fraud will be decided upon by blog/site owner and the sponsor. Disqualified entrants are decided at our discretion.
* Winners will be chosen via GLEAM on or around May 9th and notified via email. Winners have 48 hours to claim prize or new winner is chosen.
* Please email Michelle @ hfconnection@yahoo.com with any questions.

Silk
Posted by Michelle Stockard Miller at Friday, May 01, 2015