Spotlight on Christian Kachel's Spoils of Olympus: By the Sword 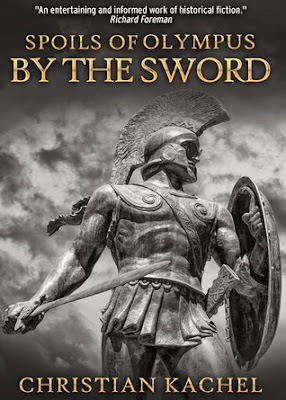 322 BC. What happens when the most powerful man in the world unexpectedly dies without naming a successor? Many great HF novels have been written about ancient Greece and, in particular, Alexander the Great, yet few works are set in the little known age following his demise and preceding the eventual Roman dominance of his empire. My historical novel blends epic military engagements, involving historical figures, with a unique intrigue involving fictitious secret societies and human intelligence tradecraft, to tell a powerful story of loyalty and bloodshed during this uncharted literary era.

As a boy, Andrikos watched as Alexander's army marched through his homeland of Greek Ionia after defeating King Darius III at the Granicus River on their way to the total conquest of the Persian Empire. Soon he will be embroiled in their world, forced to flee his old life due to an unintentional crime. Thrust into the royal army, Andrikos struggles to cope with brutal training that prepares him for the coming wars of succession as Alexander's surviving generals seek to divide and conquer the spoils of Olympus.

But Andrikos is not destined to be a nameless soldier; by chance he is chosen for a clandestine mission - and is immersed in a world of intrigue, violence and brotherhood. The path that lies ahead requires Andrikos to shed his immaturity and take on the responsibilities and emotions of a man beyond his years as he struggles to save Alexander's legacy from those who wish to usurp it.

Received three 5 star reviews from the Reader's Favorite Book Review and Award Contest:
"Christian Kachel has done his homework, researching the facts, details, and time lines for his historical fiction novel, The Spoils of Olympus: By the Sword. The character development and scenes are skillfully well written and amazingly intriguing. A reader will find themselves enthralled with each scene, page, and word of this epic tale. I thoroughly enjoyed this book. As an avid historical fiction reader, I am anxiously awaiting news of a second book release, and recommend this book to any reader interested in historical fiction, or just history and fiction in general."
--Michelle Robertson from Reader's Favorite

"Mr. Kachel has woven together an expertly researched tale. Although lengthy, I was held riveted to every page, wondering what would become of Andrikos. This is truly a tale of rags to riches. Andrikos never expects to be given certain opportunities, but he does redeem himself from the shame he left behind in Ilandra. I could tell that, despite his harsh methods, Vettias thought of Andrikos as a sort of surrogate son and perhaps someone to continue his legacy in the King’s Hand. Add in the spunky prostitute Mara as a recruited spy and Kachel gives us a cast of characters that will not soon be forgotten. I look forward to reading other books by this author and avidly await the sequel of By the Sword."
--Heather Osborne from Reader's Favorite

"Apart from revealing parts of history, the book also offers readers good suspense and intrigue. The character development of Andrikos from that of a boy to a man is done effortlessly. The author has researched well and has shared with readers that time in history which many of us are not so aware of. The author has given a lot of attention to detail and any student of history will enjoy this. The story and its setting have a good pace and will keep readers glued to the book. I liked the author's style of writing which is descriptive and detailed and makes the plot and the scenes very clear. Historical stories always catch my interest and this one with history, intrigue and the journey of Andrikos is highly entertaining."
--Mamta Madhaven from Reader's Favorite 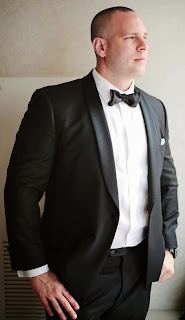 About the author
Christian is a Long Island, NY native and current resident of Northern Virginia. While attending the University of Maryland- College Park, the events of September 11, 2001 inspired him to join the U.S. Army ROTC program and volunteer for three tours of duty in Iraq and Afghanistan upon commissioning into the Army Reserves in 2003. He holds three Master's degrees and works in the defense industry.
Posted by Michelle Stockard Miller at Monday, May 11, 2015