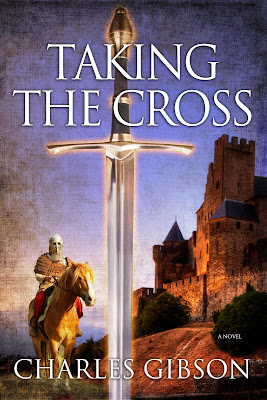 The Roots of the Inquisition

When Pope Innocent III called for the Crusade against heresy in March, 1208, he could not have known the full force of what he was unleashing. Known as the Albigensian Crusade, this endeavor, proclaimed because of the death of a papal legate in the Languedoc region of France, led to the deaths of tens of thousands over the next twenty years, devastating one of the most wealthy and free regions of Europe in the early 13th century.

It also led to the Inquisition. Contrary to what you might think, the Inquisition started in France in the 13th century, not centuries later in Spain.

My historical novel, Taking the Cross, is set during the opening summer of the Albigensian Crusade, in 1209. The main male character, Andreas, is lead knight to Raimon Roger Trencavel, the Viscount of Carcassonne, Albi, and Beziers. The Viscount, a historical figure, was the main target of the Crusade. Thus Andreas ends up fighting against a Crusade. 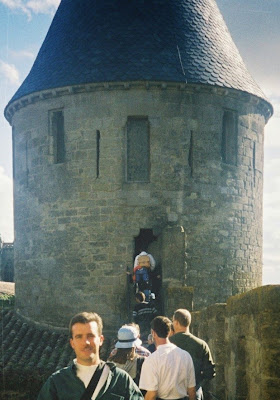 Charles Gibson in front of the Tower of the Heretics in Carcassonne, France.
Heretics were hanged inside from the crossbeams of the tower in the 13th century.

Yet the efforts of the Catholic Church to purge the Languedoc of heresy were not warlike at their inception. In the year 1203, Dominic of Osma appeared before Pope Innocent III asking to make pilgrimage to the Holy Land in order to proselytize Muslims. Innocent, more vexed over the spread of heresies throughout Christendom, and in the Languedoc in particular, had a different idea. His charge to the idealistic canon from Spain was that Dominic make journey to Southern France and preach to the Albigensian sect, known also as the Cathars.

The word Cathar comes from the Greek root word katharsos, which means “pure”. It is also the root of the English word catharsis, which means purification or cleansing. The Cathars believed in purifying themselves from this evil world. They took that quite literally and believed that all matter had been created by the devil and was therefore evil, including the wafers and wine of the Eucharist (or communion), and even one’s own body. They believed that Christ came in spirit form only and thus was neither born of a virgin nor executed upon a cross.

Such decidedly unorthodox views put them at odds with the Roman Catholic Church. Since it was believed in Medieval times that the survival of society depended on that society being likeminded, dissent could not be tolerated. This was true not only in religious belief but also in the practice of one’s beliefs.

This is seen very clearly in the case of the other group targeted by the Albigensian Crusade, the Waldensians. The followers of Peter Waldo from the city of Lyon, France, were targeted primarily because they wanted to practice their faith in a way deemed unacceptable by Rome. They wished to preach in public in the common tongue and also to translate the Bible into the common tongue so that all could have access to the Scriptures. What little preaching there was at this time was in Latin and nearly all Bibles were in Latin as well. The message from Rome was clear: You must not only believe as we do, but act as we do.

At first the beliefs of the Waldensians were little different than those of other Catholics, but over time they came to reject the use of relics, of infant baptism, of purgatory, and the supremacy of the pope. After repeated persecutions they eventually came to refer to the pope as “the whore of Babylon”.

Dominic was a countercultural figure in that he took a vow of poverty in contrast to the Catholic hierarchy of the day, who paraded around in opulence. Dominic traveled around the Languedoc barefoot and in the coarse tunic of a mendicant, humbly seeking alms wherever he went. In so doing he had more success than others, but that success was still limited. After five years journeying back and forth across the Languedoc, he had gleaned at most a few dozen converts.

Rome grew impatient with the lack of progress. The murder of papal legate Pierre de Castelnau in January, 1208, provided the perfect pretense to launch the Crusade that began in 1209. Dominic died in 1221, but the Crusade lasted until 1229. Dominic’s humble, peaceful means of proselytizing in the Languedoc died with him.

In 1231 the Inquisition began and was administered, ironically, by those in the Dominican order, the followers of the peaceful man who became known as St. Dominic. The tactics of the Inquisition became a basis for the modern police state. For example, those who concealed or gave aid to heretics in any way were forced to wear a yellow cross sewn into their garments. It gives reminder of the yellow Star of David that Jews were forced by the Nazis to wear during World War II.

Yet the Albigensian Crusade and the Inquisition that followed became a motivating force for religious freedom that eventually led to the Reformation. The Waldensians persisted through decades and centuries of terrible persecution and voted to join the Reformation in the year 1532.

But in July, 1209, as Taking the Cross opens and Viscount Raimon Roger Trencavel rides to meet the leaders of the Crusade to seek peace, all of that is an unknown.

About the book
In the Middle Ages not all Crusades were fought in the Holy Land.

A two-pronged threat to the Catholic Church was growing within Christendom itself and Pope Innocent III called for the Crusade against heresy to eliminate both the Albigenses and Valdenses, two movements that did not adhere to Church orthodoxy.

Andreas, a knight who longs to go on Crusade to the Holy Land, finds himself fighting against one in his French homeland. While Andreas wages war for the lives and religious freedom of his people, a battle rages within his soul.

Eva, a young woman of a new religious order, the Beguines, discovers a secret message within a letter about the death of her father in the Holy Land. As she learns more of her father, she is forced to confront the profound and perilous spiritual inheritance he has bequeathed to her. A legacy for which she must fight.

Hearing of the feats of Andreas, Eva senses her inheritance may lead her to him.

They both face an evil that threatens to consume them.

Filled with battles of the flesh and the spirit, Taking the Cross reveals a passionate aspect of Medieval times where some fought ardently for the freedom of others.