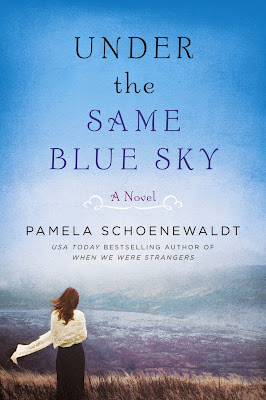 Being boundlessly fascinated by history is essential to—but sometimes the curse of—historical novelists. In research for Under the Same Blue Sky, set during and after World War I, what I found out about the 1919 Influenza Pandemic floored me. Sure, I know it happened. Here’s what I didn’t know:

This was the most devastating medical holocaust in the history of the world, killing 30-50 million people, an estimated 3-6% of the globe, from remote Pacific Islands to the Arctic Circle. In the U.S., 675, 000 died. Ten times as many soldiers died of influenza as were killed in battle. Average U.S. lifespan was depressed by 10 years. Death was horrific and could come within 24 hours of the first symptoms. Treatment was palliative at best. While most epidemics select for the young, the elderly, or the weak, this influenza, turning the body’s immune system against itself, targeted healthy young adults in their 20’s-30’s: young parents and the working powerhouses of their communities.

I read heart-breaking stories, worthy of many novels. Disaster brings out the best and worst in human nature: selfless heroics and ugly profiteering. Cemetery workers priced-gouged or simply left grieving families to dig their loved ones’ graves. There weren’t enough coffins. A survivor shared a searing memory of parents in Philadelphia’s hard-hit Italian community screaming after the death cart bearing their baby away: “Put him in a macaroni box, at least a macaroni box.” He was dumped in a common grave. There were weird civic alliances. When Pennsylvania’s governor closed all public gathering places—schools, theaters, churches, taverns—Pittsuburgh’s churches and taverns lobbied together to rescind the order, both groups claiming that the solace they offered overruled the risk of infection.

To gather this information I drew on many sources, starting of course with internet materials. But these needed to be vetted and expanded. I want readers to trust me. I don’t want to tangle with HarperCollins fact-checkers: a tough breed. A public library and interlibrary loans helped. I interviewed an epidemiologist in public health and a physician on pediatric complications since one of the“victims” in Under the Same Blue Sky was a three-year old boy.

I had to do this research very quickly. The pandemic was only one of many topics to research in the year that my contract specified for a 100,000 word final draft. And here’s the catch. In the end, I cut pages and pages of influenza material. Fascinating as it was, accurate as it was, some details and scenes just didn’t in the end pull their weight to serve the story. I’m no historian. I’m a particular breed of storyteller, a historical novelist. That means being ruthless, tireless in gathering and checking and cross-checking material—and then being ready to listen to your inner (or outer) editor and let it go. Or . . . keep it for the next book.

About the book
As World War 1 engulfs Europe, Hazel Renner’s German-American community is increasingly isolated and suspect. Hazel’s mother is convinced that Hazel’s mysterious healing talents point to a career in medicine, but Hazel’s dreams lie elsewhere. As the war escalates, Hazel escapes to teach in a one-room country schoolhouse, desperate for peace. But peace is impossible when her healing powers bring shattering consequences, beginning a journey that takes her to an exiled baron’s looming castle in New Jersey and into the ruins of post-war Germany to solve the mystery of her past, ultimately of herself, as she fashions a new kind of healing for a shell-shocked hero and one small boy.

“Absorbing and layered with rich historical details, Schoenewaldt weaves a tender and at times, heartbreaking story about German-Americans during World War I. With remarkable compassion, the author skillfully portrays conflicted loyalties, the search for belonging, the cruelty of war, and the resilience of the human spirit.”
--Ann Weisgarber, author of The Promise and The Personal History of Rachel Dupree

“The past returns in this story of the Great War, to tell of some who survived and some who didn’t. Hazel Renner is a hesitant healer, a young woman afraid of her gift. When the power to cure physical ailments deserts her, she tries instead to mend the human spirit. Rich in historical detail, this novel describes what it is to be gentle in a world gone terribly mad.”
--Rita Leganski, author of The Silence of Bonaventure Arrow

"From the smoke-filled streets of Pittsburgh to the war-ravaged landscape of Europe, UNDER THE SAME BLUE SKY is the story of one woman’s wonderfully determined journey through a world at the edge of war to seek her family’s past and her own future.
--Jessica Brockmole, author of Letters from Skye

About the author
Pamela Schoenewaldt is the USA Today bestselling author of the novels WHEN WE WERE STRANGERS, which was translated into three languages and selected as a Barnes & Noble Discover selection, and SWIMMING IN THE MOON, which appears in German this year and which was short-listed for the Langum Prize in American Historical Fiction. Her prize-winning short stories have appeared in literary magazines in England, France, Italy, and the United States. She taught writing for the University of Maryland, European Division and the University of Tennessee. You can find her online at http://pamelaschoenewaldt.com/.
Posted by Michelle Stockard Miller at Friday, May 08, 2015