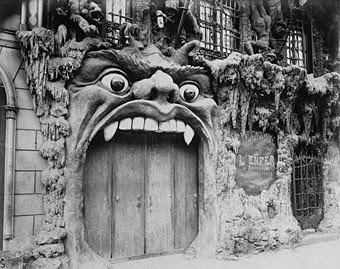 I posted last time about a cabaret in Montmartre where death was the theme. Well, this cabaret took it a step further. It was named Cabaret de l’Enfer (The Cabaret of the Inferno) and was satanically themed. Cabaret de l’Enfer was in the red light district of Montmartre (Pigalle), not far from Moulin Rouge. From the late nineteenth century to the mid-twentieth, patrons could come and drink in hell. This cabaret is very hard to gather much information about, unfortunately. I will tell you what I know. It seemed to have operated for over fifty years, and was located on the Boulevard de Clichy. 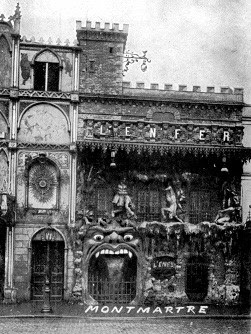 The entrance was a large, horrible, fanged open mouth in a gigantic face with eyes blazing crimson. “Enter and be damned. The Evil One awaits you!” was the warning people heard as they entered the hellish nightclub. The chorus of rough voices was enough to make even the bravest man reconsider.

Once inside there were crevices in the walls with molten silver and gold, flames would shoot out of rock clefts, and thick smoke came from smoldering fires in various caverns, smelling of sulfur. Thunder rumbled throughout.

One cauldron over a “fire” had musicians playing various instruments, and if they didn’t play correctly they were prodded by imps holding “red hot” irons. In fact, all servers were red imps. Many carried boiling and smoking beverages to the thirsty, damned patrons.

Most patrons sat at red tables which glowed, then dimmed, only to glow again and again. All orders were screamed out, changing them to frightening ingredients and side-effects. More imps sat on fires or turned somersaults across the floor. 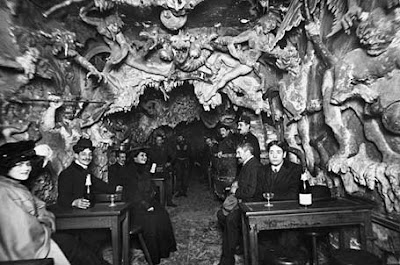 One could even witness a snake transforming into a devil. Of course, Satan was there, heckling all who dared to stay once they had entered. He walked the club in a scarlet robe, adorned with glowing jewels. His sword blazed with fire. He had a black mustache that curled up into sharp points and a sneering grin. His shrieking laugh bounced off the walls, making the place even more leery. He’d accuse women of sending men to hell with their “ways” and condemn others to eternal damnation. 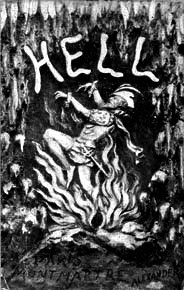 Next door was another cabaret with the theme of Heaven, complete with angels, harps, and clouds. It wasn’t nearly as popular as hell. I wish I had more information to share with you about these two places, as they sound like fun places to visit. Even though the information is sparse, I hope you enjoyed what I was able to share.

If anyone has more information about either of these two places, I would love to hear from you at caddyauthor@gmail.com.